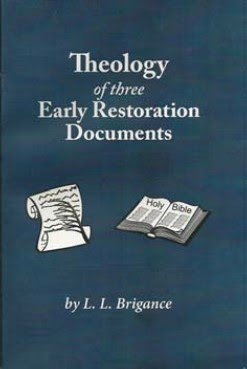 My father and I were able to enjoy the 2014 Freed-Hardeman University Bible Lectureship together, which is a great blessing! I always enjoy the presentations coordinated by the Friends of the Restoration Movement. This year, I was delighted to hear Sam Hester of Hester Publications announce the near completion of a new book. For those unfamiliar with Hester Publications, they reprint books, particularly restoration works that are difficult to find. The book is a compilation of articles by L. L. Brigance written for the Gospel Advocate in the 1930s. The book is entitled Theology of Three Restoration Documents and analyzes The Last Will and Testament of the Springfield Presbytery, The Declaration and Address, and The Sermon on the Law. Sam Hester agreed to send me one of the first copies available.

E. Claude Gardner studied under L. L. Brigance, and he was at the announcement. Sam Hester asked Gardner to comment on Brigance. Gardner’s comments match his statement on the back cover of the book:

"L. L. Brigance was known as one of the top Bible teachers and scholars of Freed-Hardeman College the first half of the 20th century.... He was recognized for being balanced and free of extremism. His writings and teachings on the Restoration Movement had a far-reaching impact on influential preachers…. I counted him as the best Bible teacher of my college career. Because of my admiration and appreciation of him, I edited a volume of his sermons."

Brother Gardener did more than edit the sermons, he typed them himself! I have enjoyed reading Brigance's analysis of The Declaration and Address which he considered the greatest religious document since inspiration. Now, one may find Brigance’s assessment excessive; however, I suggest reserving one’s verdict until reading Brigance’s case. Here is a sample from "The Right to Private Judgment":

"Intolerance has ever been one of humanity's greatest weaknesses. We want others to agree with us--to see things like we see them, to believe, think, and act like we do. And if they do not, we do not like it nor them. We want to suspect their motives, declare them unsound, interdict them, 'read them out of the party.' Of course, it is not only our right, but our duty, to insist upon the plain teaching of God's word--to urge all men to follow it. It is the divine standard, the infallible standard, the only standard of truth and duty. But our opinions, preferences, prejudices, and judgments are an entirely different matter. We have no right to insist upon anyone conforming to them. To do so is to deny to men 'the right of private judgment.' Suppose that after diligent study I am in doubt as to the meaning of a passage of Scriptures. I search the commentaries. I find that 'able men' differ about it. And 'what shall we do when the doctors disagree?' We must decide for ourselves..." (L. L. Brigance, Theology of Three Restoration Documents, p. 22)

Many are familiar with N. B. Hardeman but may be unaware that Brigance assisted in the preparation of material for the Hardeman Tabernacle Sermons. Hugo McCord, who was baptized and taught by Brigance, told me Brigance stated, "I cannot preach like brother Hardeman, but I helped load his gun." Be sure and do not overlook this keen analysis of three major works which moved many toward "a restoration of the ancient order of things."

When the Prodigal is Your Prodigal by Steve and Kim Higginbotham 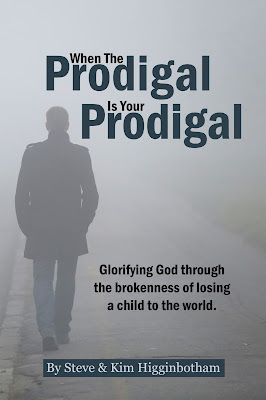 When the Prodigal is Your Prodigal by Steve and Kim Higginbotham

The Higginbotham and Kenney families have known each other for years. The nature of ministry is such that times in each other’s presence is limited, but there is still a bond formed. I remember my parents making a special effort to attend Frank’s funeral (Steve’s father) because they were preaching brothers. Like many others, we were dismayed about Steve’s cancer prognosis the Higginbotham family shared with the brotherhood. We join many others who are praying for him and the family. I had heard they were working on this book, When the Prodigal Is Your Prodigal, and I was hoping they would be able to release the book despite the medical treatments that are so demanding on their time and energy.

The book is one that every parent and Christian ought to read.  The book does detail the particulars of their family’s circumstances and despair. I have witnessed from a distance the loss of Steve’s father, and the threat to his health, but I was unfamiliar with the torment he and his wife, Kim, were suffering due to one of their children becoming prodigal. While some will find details curious, which will be freely and painfully given, they will better understand the magnitude of their experience and benefit from the efficacy of their writing on this subject. The reason I would encourage others to read this book is to be more aware of the silent pain and suffering some go through and be more sympathetic and compassionate. I have witnessed parents go through emotions akin to what Jacob felt when he cried out when his sons were pressing him to give them care of his youngest son Benjamin: “My son shall not go down with you, for his brother is dead, and he is left alone. If any calamity should befall him along the way in which you go, then you would bring down my gray hair with sorrow to the grave” (Genesis 42:38 NKJV). Sadly, many suffer in silence and deprive themselves of Christians who are supposed to be burden bearers (cf. Galatians 6:2). Worse, some Christian fail to bear burdens!

The book is an excellent treatment of the subject of church discipline. It deals forthrightly with cop-outs people make to avoid administering discipline to the erring and rebelling. The book deals with the resistance, rather than support, of other Christians who were puzzled how they could withdraw from their prodigal that has gone into the far country of sin. The Higginbotham’s have not only “talked the talk” but have “walked the talk” too. Anyone who reads the book will have their eyes opened on how the world can hold faithful Christians who are suffering because of their child’s sin in disdain. Kim recounts the nightmare she was made to suffer on a national scale from those who have no regard for God’s Word, biblical morality, and faithfulness. The lack of compassion from the so-called tolerant crowd is one that Christians need to be aware of and not naive about even if it is unpleasant. One wonders why anyone would invite more anguish by writing such a book, but after you read the book you will understand better. The book discusses the process by which the Higginbothams turned their private shame into a ministry for those broken by the loss of a child to the far country of sin. It deals forthrightly with those who twist scripture to suit their own agendas. It is an open presentation of the lessons they learned and even the blessings they have received. People who are not Christians will be shocked by this statement: “I would rather attend my son’s funeral than to watch him turn his back on God and walk away to never return.” The world may recoil at such words, but godly parents fully understand and will pray even more fervently to preserve their family from Satan and the world after reading this book (if they are not living such a nightmare).

Welcome to my blog! It contains book reviews, research on hymns, and more.

To learn how to navigate the site to find various book reviews, find locations to purchase books, etc. I suggest you select the label below "drkenney" and read these posts first to help you get the most out of the blog.

DISCLAIMER: Not all books are written by members of churches of Christ. All books should be proven with the word of God. A review of an author's book is not an endorsement of all the author's works.

Books I am Reading